Once the grammar has been learned …

Once the grammar has been learned … 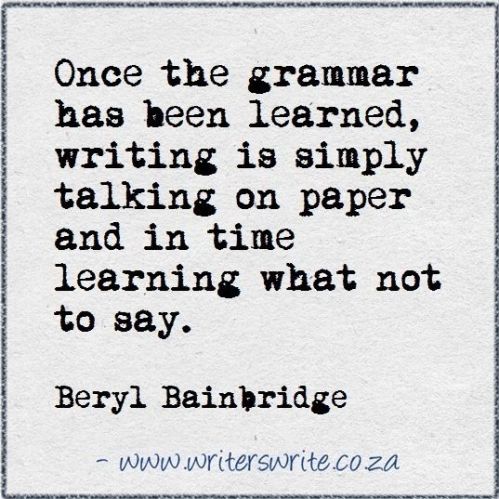 Tagged Beryl Bainbridge, Grammar, Once the grammar has been learned, Quote, Writer

Beryl Bainbridge … I don’t mind working in a bit of clutter. It’s your head that has to be clear…

Beryl Bainbridge (1932-2010) was an English writer from Liverpool.
She was primarily known for her works of psychological fiction, often set among the English working classes. Bainbridge won the Whitbread Awards prize for best novel in 1977  and 1996; she was nominated five times for the Booker Prize. She was described in 2007 as “a national treasure”. In 2008, The Times newspaper named her among their list of  “The 50 greatest British writers since 1945”. 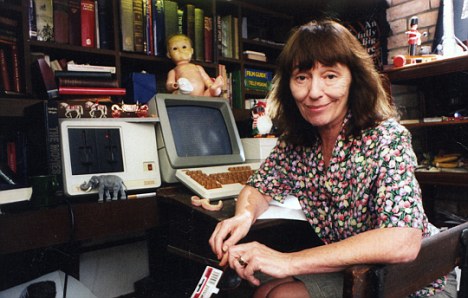 In an interview for the Paris Review in Autumn 2000 she spoke about her writing-routine … When I’m writing, yes. I work day and night. I don’t go out. I sometimes don’t go to bed, but just nap on that sofa. I often don’t have a bath, because the treat of having a long bath after five days and washing my hair revitalizes me. I smoke, but I don’t drink. When I’m writing journalism, I sometimes have one drink, or if I get stuck in a book, I might have a shot. I live like that day and night for about four months, then it is over, the book is finished and I have a long bath … I write directly on the word processor, but I use the machine as a posh typewriter and print out every page the moment it’s finished. 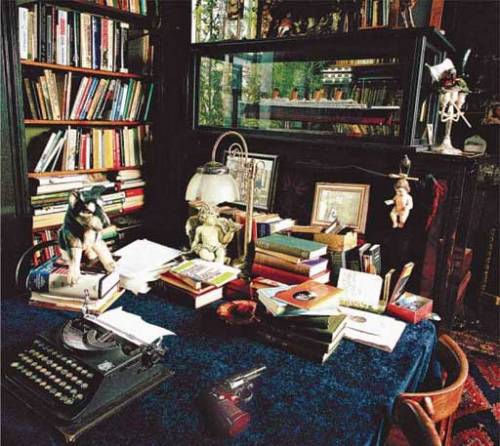 In an interview for the Guardian series on Writers’ Rooms in 2007 she described the objects on her writing desk … I got the typewriter in 1958 from a Chinaman. You can’t get them mended anymore so I have to be very careful with it. I do first drafts on it. It gives you more time, because it is so old you have to thump it, where a computer just races. I type it up onto a computer so I can correct it. Then it goes on to somebody who does it properly, because I can’t spell.The dog is a puppy I think his name is Walter – one of my grandsons won him as a prize at school. Because he’s very young, the puppy sometimes sits with me while I’m working. He doesn’t distract me. I’ve got a full-size buffalo in the hall and I don’t notice him. The cherubs used to be sold in the Oxfam shops on Camden highstreet: they aren’t in any sense valuable, they are just very nice.The books are there because there’s no other place to put them. I can’t remember where they go back so they just stay on the table.The ashtray is a memento of happier times … I did think about leaving some butts in it, but then the children would be so cross with me.The Titanic was made for me by my grandson Bertie, when he was only about 12. He gave it me for my birthday when I was writing Every Man for Himself. I’ve never taken it out of its case because it’s so beautiful.On top of the candlestick on the piano is a model of a soldier lying down firing over the battlements with a flag one of my grandchildren made. I don’t mind working in a bit of clutter. It’s your head that has to be clear…